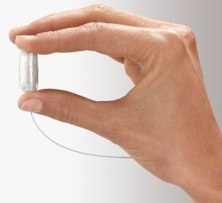 Obalon is a new gastric balloon now available in the UK. It differs from other forms of weight loss procedures in a few ways. First it does not require surgery for deployment. Instead it is ingested orally, in the form of a large capsule.

This capsule is attached to a small tube which is then used to inflate the balloon. After inflation, the capsule dissolves and the tube is removed. The balloon, which is now inflated to the size of an apple, sits at the top of the stomach and is supposed to provide a feeling of fullness.

It is hoped that this will encourage patients to eat less, and consequently lose weight. Additional balloons, up to 3 in total, can be deployed in stages, but most procedures will involve two balloons. The maximum time for the balloons to be in the stomach is 90 days.

There are several potential benefits to this technology. In traditional bariatric surgery procedures like those for stomach stapling and lap-band insertion, potential complications range from issues with anaesthesia, to incision site infections, bleeding, pulmonary embolism and death, among others. Obalon does not require surgery.

Even though the traditional gastric balloon procedure also allows patients to avoid surgery altogether, there is still the potential for harmful outcomes. Traditional gastric balloons are typically inserted through the mouth and esophagus, and then filled with saline. Patients are usually sedated for this, so it is still possible to have complications from anaesthesia. Obalon circumvents this.

The pill is simply swallowed and the inflated by a thin tube (by a medical professional) – once the pill is inflated to the desired size, about the size of an apple the tube is removed.

However, because the balloon will sit in the stomach for an extended period of time, it could rupture like a traditionally inserted balloon and end up in the bowel. The complication would come in if the bowel became blocked by the balloon rather than expelling it naturally. Other complications that mirror those of traditional gastric balloons are more likely to occur. These include nausea, vomiting and discomfort, especially in the first few days after the procedure. 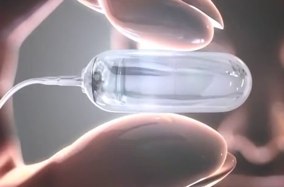 Another potential benefit is the target audience. Weight loss procedures in general are usually reserved for people with a body mass index (BMI) greater than 27. Obalon is intended for people with a smaller BMI, who typically do not qualify for weight loss surgery. Rather than drastic results, the average outcome is about 1 stone and 3 lbs over the 12 week period. The main hope is that the feeling of fullness, and subsequent reduction in food intake will lead lay a foundation for more permanent lifestyle changes once the balloons are removed.

Apart from physical complications, Obalon has other potential drawbacks. One is the price. Since it is currently only available privately, patients will need to pay about 2,995 GBP for the two-balloon procedure.

This could prove to be prohibitive to some, while others question whether or not that money could be better spent in pursuit of similarly modest results. Other drawbacks to consider include not losing as much weight as anticipated or not losing weight at all, and/or the return to negative eating habits after the balloons are removed. Also, this product is clearly not suitable for individuals who have trouble swallowing, as the capsule is the size of a rather large vitamin pill.

This product could prove to be a god send for people who currently exist in the limbo between morbidly obese and healthy. Used as intended, it could provide the motivation and means for them to lose weight over the long term and avoid serious weight-related diseases or the need for more risky weight-loss procedures in the future. Conversely, it could also just be an expensive crutch for those who lack moderate willpower.