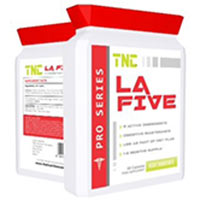 LA Five is a diet pill manufactured in the UK by TNC (That Nutrition Company).

The company has only been actively marketing its products since Spring 2015, but when we checked their website, in March 2016, it was no longer active.

This could be seen to suggest the company is having difficulties, and some Amazon reviewers state they failed to receive their orders. None of this inspires confidence.

What is LA Five and How Does it Work?

LA Five is unlikely to live up to all the claims made for it because it does not contain any ingredients that are associated with detoxification or T5 fat burning.

T5 fat burners provide ingredients that stimulate the thyroid gland and cause it to release metabolism-boosting hormones.

Several ingredients, including kelp, may achieve this, but the LA Five formulation fails to provide any of them. Nor is the formulation likely to be efficient as per-workout formula, but some of the ingredients utilized may support the fat burning process.

Usage Guidelines
– TNC suggest a dosage of 1-2 capsules per day but fails to explain if the maximum dosage is one capsule, taken twice per day, or two capsules taken together. 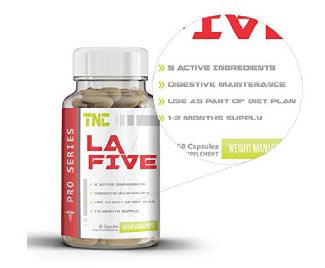 Although the Amazon sales page contains a wealth of positive feedback that appears to suggests an effective product, the “1 star” reviews make interesting reading and indicate TNC may have been attempting to manipulate Amazon’s system.

One lady claims she was offered free product in exchange for placing a review even though she had never used the pills. She then states: “If you need to bribe people to write a review they can’t be good.”

Several of the reviews placed by dissatisfied customers mention order fulfilment problems. Many of those who received their orders claim the product does not work and a few customers even claim to have put on weight during the supplementation period.

TNC states the formulation is unsuitable for pregnant or lactating women or people who suffer from allergies. Anyone who is using medication should seek a doctor’s advice before they commence supplementation. Users who experience side effects should cease supplementation and consult a doctor.

Where to Buy LA Five

Each bottle of LA Five contains 60 capsules and costs £7.43 from Amazon.co.uk (price correct at the time of this review).

There is no money back guarantee.

We have compiled a list of diet an weight loss products based on criteria such as effectiveness, safety and customer support.